Most details here are targeted towards future me, but you are welcome to listen in. 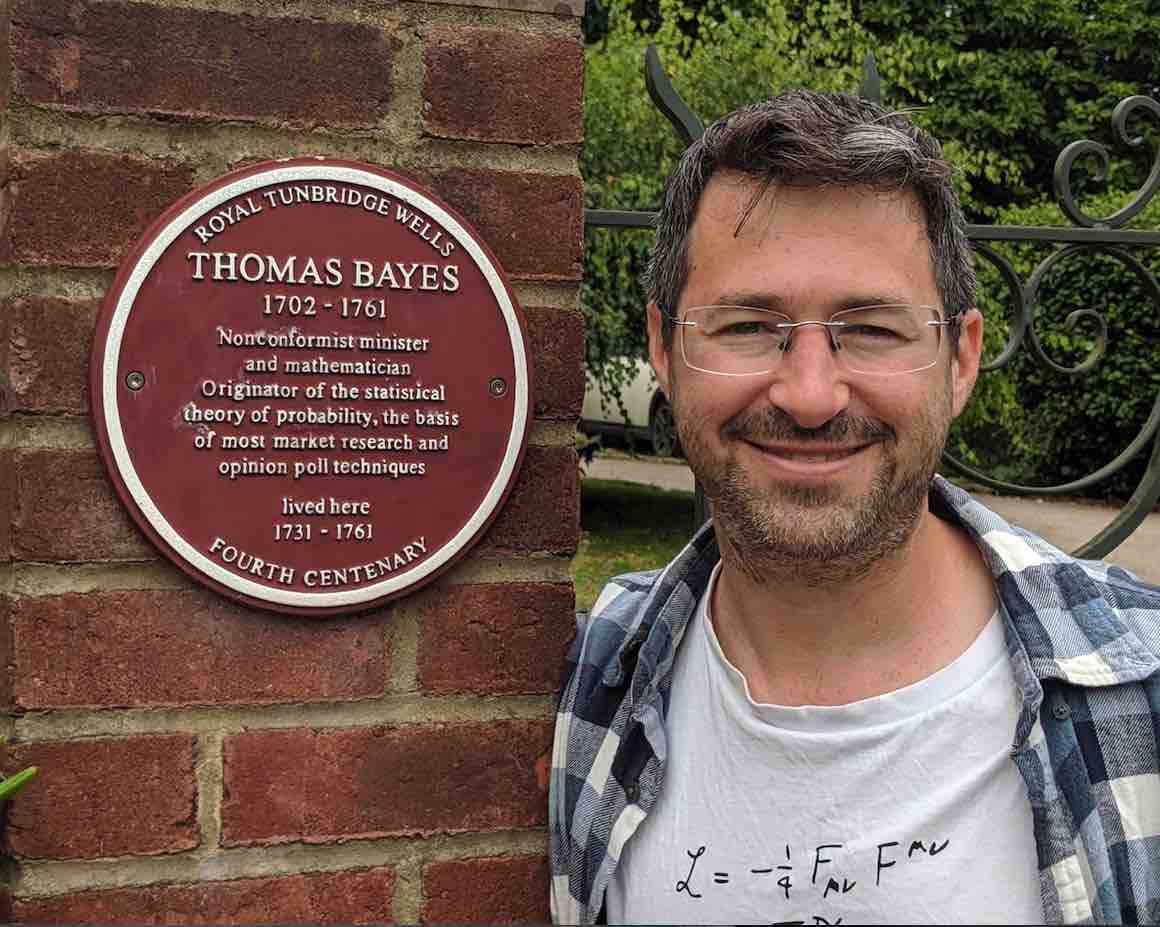 Giving my respects to Thomas Bayes in Tunbridge Wells, England.

I infer therefore I am

Physics teacher Meir Boneh wrote this on the board (in English) at the beginning of each lecture.

Professor Melamed Emanuel’s response to requests to leave for the restroom: No matter how much you dangle, some will remain (in Hebrew it rhymes).

Instructor in the Communication Corps. At least I wasn’t at sea …
Was in reserve training call until 2010. Retired as Sergeant first class רב-סמל
Claim for fame: I Volunteered for reserve training in 2002, but was released on site because I was described by the commanding officer as “a good person”.

Chile-Argentina-Brasil-Bolivia-Peru on a shoe string

I learned how to learn
Claim for fame: I never took a test twice. אף פעם לא עשיתי מועד ב׳
Claim for fame II: For a time I tutored enough not to use an ATM for months.

Professor Aharon Davidson about my confession that I initially intended on studying engineering before I fell in love with physics.

The question with which I fell in love with physics as presented in Mechanics recitation by Irit Maor:

A helicopter is hovering above a mark X on the equator. The pilot drops a rock. Neglecting wind and friction, where in respect to the X will the rock land: North-East-South-West or something in between?

I loved that we solved this just with words, and then learned the math tools to generate quantifiable predictions. By the time I got back to my dorm, I forgot the verbal explanation and had to build the logic up again from scratch. It was great!

I should have squashed you in Calculus ! אני הייתי צריך לאכול אותך בחדו״א

Professor Kagalovski response to my quesetion during the Advanced Mechanics final exam when he misunderstood my question regarding cosine angles.

This only makes sense in Hebrew … During a lectur on Solid State physics, Professor Dan Rich says in Hebrew with a strong American accent, to do an integral on our ass, actually meaning on one cell. פרופסור דן ריץ׳ בשיעור מצב מוצק מתכוון שנעשה אנטגרל על תא אחת

I measured a bump on a graph which excited a small number of specialists.
10 second elevator pitch: As an observational cosmologist, I analysed 3D maps of galaxy distributions to quantify the amount of dark matter in the Universe as well as measure its expansion rate.
Elevator pitch to the 100th floor: To this end I measured the large-scale structure of ensembles of distant galaxies. My focus was on a weak signal (1% effect!) which is considered the longest standard ruler known is cosmology at a length of half a billion light years!
Claim for fame: In my second publication I pissed off a tenured professor by debunking his claims. Claim for fame II: I met eight nobel prize winners in physics, six of which attended my lectures.

I still can’t believe that someone is paying me to study physics in New York City.

Me a few months in NYU confessing to a professor about my amazement of living and studying in NY thanks to a fellowship.

So, what should I go home and tell my wife?

Andre’s question for most speakers (including Nobel Prize winners) about the conclusion of their presentation.

His conclusion after my dissertation cross-fire examination. He was right, and I did!.

I participated in a garbage-in garbage-out project for a non-startup.
Claim for fame: I was known as “that guy who wrote the blog post with the picture of a notebook”. Strategically advertised in LinkedIn and Facebook forums, the post had over 1,000 reads in the first day (which was a lot at the time!)

Go where the data are

Prof. Michael Blanton suggesting how to choose between postdoc offers. I took his offer and did a postdoc in Australia, and then following the same advise left for a career in Data Science.

3.5 year highlight: A successful snail-mail A/B test project where I proved to myself that my Machine Learning model actually has some merit to it.
What most people want to know: Upon request I did not work on the 2016 presidential campain.
Claim for fame: Half of a joke that I made about the CEO at a company party made The NY Times.
Claim for fame II: I gave my one month notice before the massive press coverage.

The half joke that made The New York Times:

But for the intended auidence that was not the punch line. The punch line was (which needs context to appreciate):

How does he do it? He sells them Ripon!

The context: Ripon was a customized campaign software platform that Cambridge Analytic sold. I always thought it a peculiar name (considering it sounds so much like Rip Off) until I learned that is is named after the town of Ripon, Wisconsin, where the Republican Party was founded).

Ten days of meditation training during May 18-29.
I highly recommend! I made nice AI-ish visuals to impress investors.
Claim for fame: I made a presentation with cool animations that was circulated to all large pharmaceuticals worldwide.
Highlight: Got to learn protein biology on the job and experience a growing startup

I also dabbled with Design of Experiment with the objective of maximising DNA yield given concentrations of reagents.

LG webpage around the time I left.

I joined Babylon Health in mid April of 2020 as a data scientist.

My first project is working on the company’s Symptom Checker product. In detail, I work on prototyping creative solutions for its clinical triage feature.

Make yourself a priority

Colleague’s advise on how to get things done.